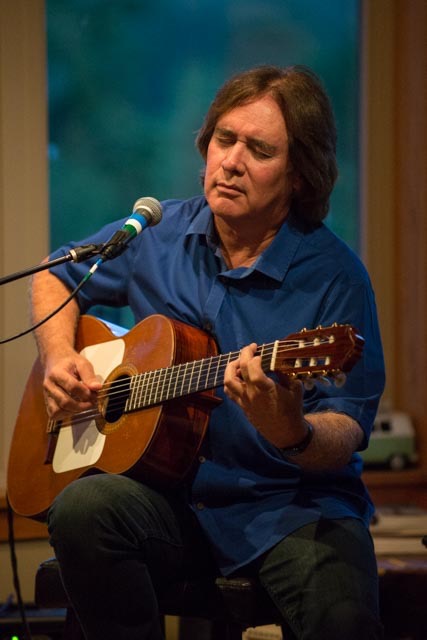 Real confidence only comes with experience. And real-world work experience can never be learned in the practice room or the rehearsal studio. I spent months teaching myself how to sight-read on the guitar in my apartment bedroom. But I never “owned it” until I’d done a handful of TV and movie sessions where the chart reading was difficult and there was pressure involved.
On one particular session I had 19 bars of solo nylon string guitar before the orchestra’s entrance. It was very difficult “stacks of notes” chord reading. During take after take, as I got close to the orchestra’s entrance at bar 20, I’d see the 56 string players lift their bows out of the corner of my eye. Invariably I’d get freaked out and blow it.
I started to sweat a bit, but soon realized this would be hard for any guitar player! You need to breath deep in these situations and remind yourself, “Wait a minute, here! I’m the expert in the room on this instrument, and playing this intro is something most classical players would practice for weeks before performing it.“
Back in 1988 I played on a movie called “The Milagro Beanfield War,” with a beautiful score by Dave Grusin. They’d hired Angel Romero, one of the world’s finest classical players, to do the nylon string acoustic stuff. I remember my fellow studio guitarists (Lee Ritenour and Mitch Holder) and I tried to sit in front of him and just watch him do his solos, but he kindly asked us to leave. Even the heaviest cats get nervous sometimes! We all went into the booth and watched him work through take after take of very difficult music while we took a break. I’m sure his confidence came from many years of recording. That score got the Academy Award for best music in a film that year.
There is also confidence that comes from realizing your strengths. On my very first session with film composer Graeme Revell I was called into the studio to play on a new Brandon Lee film called “The Crow.” There was a gnarly scene in the movie where the Crow character is playing a heavy metal guitar solo on top of a building and throws the guitar over the edge at the end. I noticed the music on the chart and the action on the screen didn’t really match up: his fingers were wailing but the written music was a slow and soulful ballad.
After playing the part I told the composer, “With all due respect, I can read this part but I can probably improvise something vibe-ier for this scene.” I pulled out my “stunt guitar” with a Floyd Rose bridge and played a long run followed by huge dive bomb as they rolled tape for the take. Five years before that I’d have never had the nerve to suggest something like that to a well-known film composer, but with experience one’s confidence grows. You recognize your strengths as a musician and pull them out when the opportunity arises.
The same goes for playing live. Sometimes I’ll walk out on stage to a sea of guitar players in the audience. Again I have to remind myself, “I’m the expert here! I play differently than all those guys!” I take a slightly different tact when sitting in with monster guitarists. In those situations I simply remind myself that all I have to do is to be the best ME that I can be. Because we all hear it, see it and play it a little differently and that and a lot of practice is all it takes to succeed on stage or in the studio. Confidence = Practice + Experience.