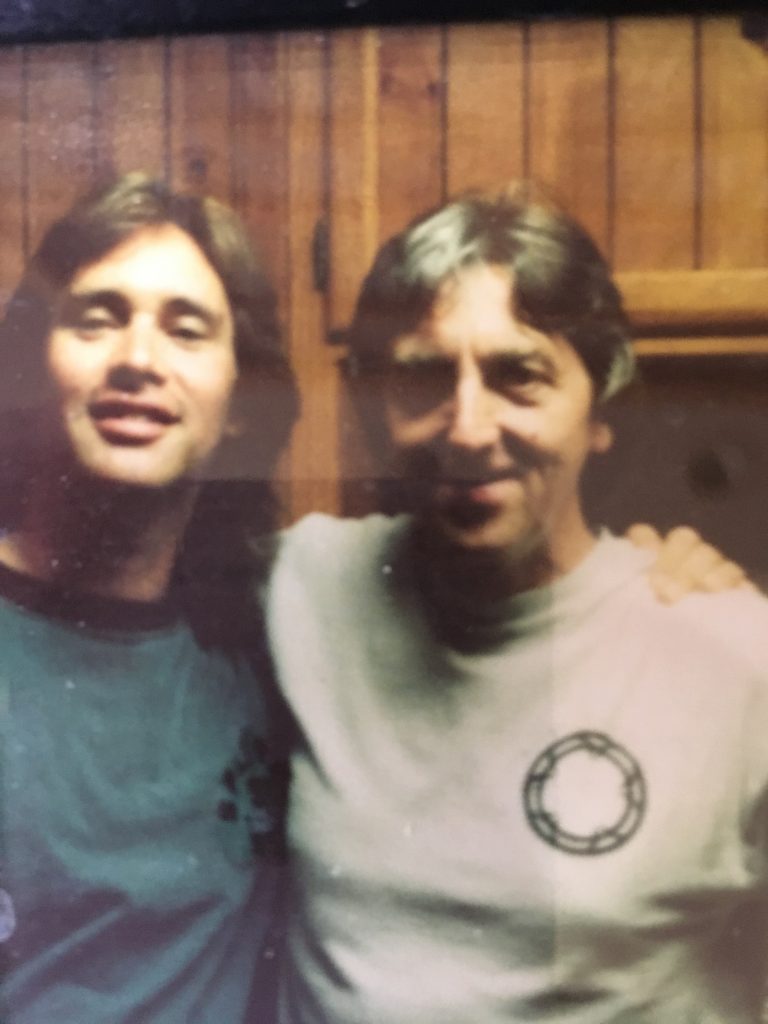 May 2, 2017 by Carl Verheyen Uncategorized

I just finished writing an article for Guitar Player Magazine about the passing of my friend Allan Holdsworth. But there is so much more to say…
I first met Allan in the early 80s after hearing him on a Bill Bruford album called “One of a Kind” that came out in ’79. None of us had ever heard anything like that on the guitar, and I was amazed to find out he’d moved to California and was living nearby. His music sounded so foreign to me I figured he must be from somewhere far, far away like Yorkshire, England!
I’m not sure how we met, although I was playing with drummer Chad Wackerman quite a bit in those days and he joined Allan’s band around that time. We began to get together and play at Allan’s house and I learned a lot about how he constructs his chords and lines from sitting right across from him. It was intimidating but as a 20-something guitar player that lives, breathes, eats and sleeps guitar 24 hours a day, I wasn’t about to miss any opportunity to play with such a master.
In 1987, after being on the road with Supertramp for two years I’d written enough songs to make “No Borders,” my first solo release. I asked Allan to play a guest solo on it, never imagining he’d agree. But he did and happily came down to the studio to play a beautiful solo and melody on my song “Gretchen’s Theme.” I had previously recorded it with saxophonist Richard Elliott on his “Initial Approach” album, but this was the definitive version.
Then in 1990 he called and asked me to go on the road with him as a second guitarist, but prior commitments in the LA studios kept me from joining that tour. I’m still kicking myself for turning it down, but I had to stay true to my word with my reputation at stake.
Years later I wrote another song called “The Notch” that I thought would be a great piece for Allan and I to record. I took it to him and he composed an entire second harmony part to the song that was absolutely brilliant! We never got around to recording it but each time I’d see him he’d say, “I’ve still got the chart for The Notch!” I ended up recording a solo acoustic version on “Solo Guitar Improvisations” and recently with a group called “Solar Flare” led by David Gilmour’s drummer and ex-CVB member Steve Di Stanislao. Sadly Allan’s part will never be heard…
It’s such a mystery, how a guy from a relatively small town in the north of England could imagine such beautiful and otherworldly music. He was a once in a generation talent. If the highest ideal and aspiration of a musician and artist is to make music sound different, Allan….you succeeded beyond our wildest dreams.